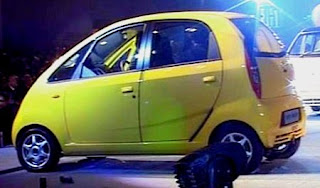 Ratan Tata has shown the world and to people like Mamta Bannerjee, that with determination, dedication and positive spirit, anything can be achieved. What seemed unsurmountable for years and to many, he has shown is possible. The Nano is a revolution in the car industry. It exposes how the automobile companies for years took the customers for a ride, charging them for their inefficiencies and with scant regard to pricing. Like Capt. Gopinath who made flying affordable and removed the sexist tag of “Luxury” to Flying, Ratan Tata has made owning a car affordable to millions of people, young & old, rich and the not to so rich. Hopefully the politicians will leave him unhindered and let him flourish. Hopefully the cAompetition will follow suit and re-engineer their cars and produce cheaper cars, more affordable yet value for money. Hopefully the customers will stand up and count to be delivered.

In a year of glories, Jai Ho, Slumdog Millionaires, MS Dhoni & company…. Ratan Tata promises to catapult India once again on top of the world in his inimicable style and humility.

Jai Ratan Tata and the whole team of Nano.