Its going to be around 62 years since we got our independence from the British Raj, but are we moving towards a “US Raj”. Why do we time and again bend backwards to placate the US. Two historical blunders by Prime Minister Manmohan Singh recently makes one to wonder so.

Where is the need to rush into a dialogue with Pakistan. Time and again they have rubbed salt into our wound. As PM Manmohan Singh agrees to look at the possibility of resumption of the peace process with Pakistan, many in India look at the move as a climbdown. Till July 17, India’s public stand vis-à-vis Pakistan was firm- no talks till terror is tackled and perpetrators of 26/11 are brought to justice. That changed in Sharm el Sheikh.

It is only betrayal and confusion. The government has shattered the hopes and expectations not just of the Mumbai victims’ families but of the whole nation.

The Pakistan Government has been going flip flop on its commitment to prosecute the perpetrators of the Mumbai Terror attack. They recently acquitted JuD chief Hafiz Mohammed Sayeed. And yet the Prime Minister is in a hurry to resume dialogue with Pakistan in the name of composite dialogue.

Where is the need and what are you going to talk on other than terrorism “Mr. Prime Minister”. Do we really need trade, cultural exchanges, sports encounters, tourism more than tacking “Terror”.

The talks have been resumed to please US, on the eve of the visit of Hillary Clinton. And there is the oft repeated certificate from “Memsahib”. The US has not pressurised India to return to the dialogue table with Pakistan, says Secretary of State Hillary Clinton and added that she was “very impressed” with Prime Minister Manmohan Singh’s discussion with his Pakistani counterpart Yousuf Raza Gilani in Egypt.

Even a child can read between the lines Prime Minister that we have bent backwards to please “Memsahib” at the cost of the country.

Has India blinked in the climate change negotiations? This seems to be the case as at the Major Economies Forum meeting in Italy, India has gone back on some of its key principles — like a refusal to accept emission caps — that it held to be non-negotiable till just before the G-8 meet in Italy.

In the course of some tough negotiations, India appears to have bent a bit in the face of pressure from industrialized countries, and the biggest compromise at the MEF was to accept that all countries would work to reduce emissions in order to not let global temperatures rise more than 2 degrees above pre-industrialisation levels.

Again, has this has been done to please the “Memsahib”, only time will tell.
Our penchant for pleasing “Uncle Sam” is growing day by day. What a climbdown from the lofty Non Aligned Movement of the Iron Lady of India, late Mrs. Indira Gandhi.

Dr. Singh, you have been a disappointment, a let down and seem to be sandwiched between two ladies. 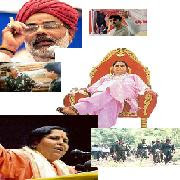 We dont need to look outside of India for enemies, detriment to our National Interests. Our politicians are our main enemy. They are the threat to the peaceful fabric, harmony and development of our state. Look at politicians like Vaiko, Mamta Banerjee, Varun G, Narendra Modi, Maoists, Naxals, Gowda’s, Mutalik etc. They thrive in politics by exploiting the poor, illiterate and backward people in the name of “people’s war, hindutva, tamil elam, moral policing”. Other than Narendra Modi, what have others achieved or rather what have the people benefitted. Poverty, lack of investment, hence lack of development, poor infrastructure, constant fighting and living in a state of fear. Good that this election shunned most of these self styled proclaimist and exposed their true colors. The less said about the Left and their Marxist ideologies the better. Pakistan is a lesser threat than these …….

Even Lord Rama couldnt help LK Advani and BJP to come to power. Merely chanting Ram, Ram, Hare Ram will not make Advani a Prime Minister. Its time that LK Advani and his over zealous BJP realised that Hindutva cannot take them no where. The common man’s need of the hour is economic prosperity and not religion. Hindutva is not going to feed, shelter, educate and safeguard the common man. He needs food, clothing, shelter and a stable job to help him live. Its unfortunate that rather than debating and harping on development, the overzealous BJP toed a wrong line and finds itself marginalised and in shambles today. Its unfortunate that Narendar Modi, despite having a strong background of good governance and development in Gujarat took to Hindutva propoganda. If he had harped on development, may be he could have done better. Its time BJP realised that the rhetorics of Varun Gandhi and Narendar Modi will not take them any farther. And as for Varun Gandhi, he fell into a bait laid down by his rivals and poor boy he got carried over by the shortlived press glory.