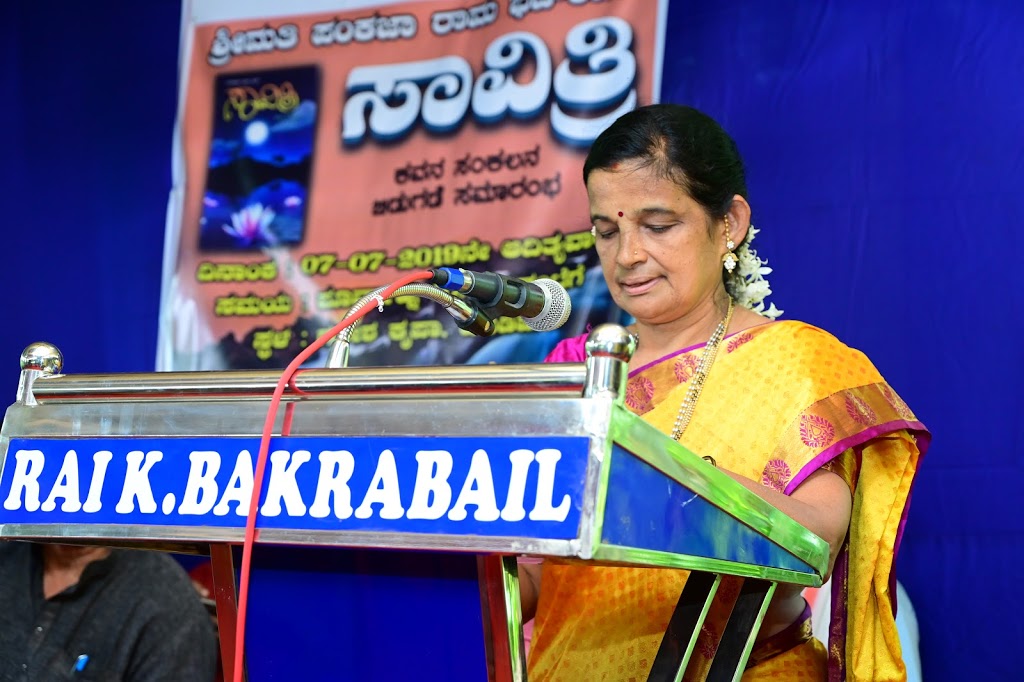 Mrs. Pankaja Ram Bhat is a Retired Assistant Post Master and wife of Mr. Ram Bhat from Mudipu. She is born into a very respectable & a large family in Mudipu.

Early in her life at an young age, she lost her hearing faculty after a bout of typhoid. It resulted in her not being able to hear and also difficulty in speaking. She is able to follow people talking through the lip movement. She cant hear what she speaks.

A deafening silence surrounded her life and for most people would have shattered their dreams and jeopardised their lives to a great extent.

But not for Mrs. Pankaja. She went on to complete here Masters Degree in History and work in the Indian Postal Service for 27 years and even worked as a Cashier handling difficult customers and managing cash.

After her daughters (Shwetha) marriage to my son (Anish Ranjan) in 2015, she took an early retirement and began her second innings. She started exploring her hidden talents – gardening, cooking, stitching designer blouses, clothes, craft work, origami and literature.

She started writing Poems and short stories in her native language – Kannada and used to publish them like a production assembly. Every other day she would publish Poems on her Face Book post.

She has written on various topics like relationship, marriage, devotional, social norms, society, education, selfie, live-in relationship, children, nature (Prakrithi), etc. Through her Poems she has shared her life experiences, her views, pains, frustrations, anguish, joy, gratitude and her emotions. It has created a platform for her to express, showcase her creativity and be able to reach out and influence a larger community.

She has helped us to focus our attention on the almost hidden, and the too often unnoticed incarnations of life and helped us appreciate the larger canvas of life. With her creative verses, she would draw her reader in and then do with her words what no magnet could do. With her Poems, she could thread her camel-like thoughts through the eye of a needle. Her Poems have been published in various magazines, newspapers and local media. She has been invited to speak and also recite her Poems in Literature Festivals, programmes and honoured by many Literary Associations, media houses etc.

Till date she has written/published/posted over 200 poems and has been posted on her blog http://baalasanje.blogspot.com/.

She received much encouragement from her family, friends and well wishers including renowned literary greats.

She shortlisted 100 of her best Poems and has published a book SAVITRI and released it on 7th July 2019. At a grand function organised at her house Shri Ganesha Kripa at Mudipu.

A galaxy of Literary greats attended the program and released the book. 1. Chair person –  Gunaje Ramachandra Bhat  – M.A. retired teacher St Aloysius College, BC Mangalore. He has published many including Munnudi to My Savitry  kavana sankalana   ,kavigalu ankanakaararu etc. He was  honoured as a best teacher and also  the member of D.K District  Chutuku  Sahitya  Parishattu. He is writer of Chutuku Havana. His articles are widely published in local Kannada media.

5. Shri Ganapathi Bhat  Permukha  M.A.B.Ed. He is the  Kannada teacher of Bilinele  High School,  well-known in ghamakist and a good singer . Has passed his gamaka exam in  2nd rank  and  introduced  savitri kavana sankalana  by  singing some poems in his own way After the release of the Book, a galaxy of Poets presented their Poems and was well received and appreciated by all guests & luminaries that had gathered.

I had the honour of being present on the occasion and was happy and proud to see the release of the Book SAVITRI by Pankaja Ram Bhat. We were very proud to hear so many literary greats speaking so high and heaping praise on her Poems and on Mrs. Pankaja. It surely is a proud achievement for her and the entire family.

This event was widely covered in the local media, press and in the local News. Abbakka TVcovered the entire event and has published the video of the event on their YouTube Channel

Mrs. Pankaja Ram Bhat is an inspiration for many of us. Despite her limitations and serious disabilities she has managed to put her creative talent to great use.  She has showed to us that nothing is impossible in life and that with determination, courage and the right attitude we can get over any challenge and surmount even the greatest difficulties. I guess this is the beginning and the poet has opened her entire treasure-trove of her vast creations for all of us to enjoy, pick and choose from for her creations.

She may not be able to hear but she has ensured through her Poems and her Book that she is HEARD.

And in this journey her family and especially her husband Ram Bhat have been of tremendous encouragement, support and help.

She is challenging me and at the same time inspiring me to write a Book that I have been contemplating for long…… only time will tell….

I have tried to write a Poem

An Ode to Pankaja