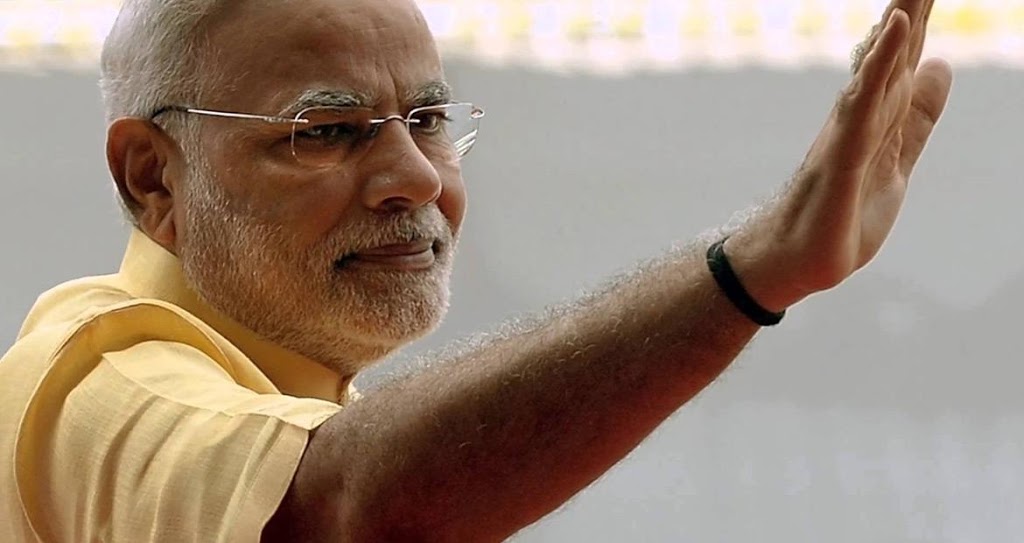 India needs Narendra Modi as much as the BJP needs power. After a long time we have a politician / Prime Minister who is astute, bold, visionary, persuasive, delivers results and can connect with People of all sections of the society.
The Economy is the fastest growing in the world, inflation at a low, fiscal discipline at its best, good foreign relations and the image of India at its best in the world, peace in the country (except in Kashmir), optimism amongst the large section of the society and stable governments across the country and a weak opposition.
No doubt that Narendra Modi is in a un-assailable position much to the envy of many a politician in the country. This is evident by the number of polls his party has swept across the Nation and the various public opinion polls pointing out that he is the best suited to lead the Nation.
Added to that is the TINA factor. There is no alternative to Narendra Modi in the country, both within the NDA and the opposition parties. The opposition is largely a divided house as there is no ideology in their approach except for an anti-Modi ideology.  The more anti-Modi stance they take, the stronger Modi becomes.
However the NDA must not forget history and hope it will learn from it. Rewind and you will find that NDA and Atul B Vajpayee were in the same boat in 2004, to the extent that they coined their election campaign as “India Shining”. Economy was the fastest growing and in fact had touched double digits, good foreign relations, low inflation, peace & stability in the country.
However despite all poll predictions the UPA stumped them at the polls and captured power and hung on to it for a decade.
No doubt in politics there will be reversals and one cannot expect a Party / Leader to be ruling for ever. There is bound to be anti-incumbency sooner or later. However the large majority of the population of this country wants Narendra Modi to continue atleast for another 5 years if not longer.
If ever any one can defeat Modi it will be himself or his party. He is unassailable now but can be dethroned if he is not sensitive and careful.

He has undertaken some bold steps through Demonetization, GST and attacking Black Money. The country by and large has backed him and supported him beyond anyones imagination.  The Government has tied all loose ends and is widening the Tax Net and going after tax evaders, hoarders and black money in a big way. Sounds great. But in the cross fire, the common man is beginning to feel the pinch.
He had promised “less government and more governance” but the action on the ground it is all but “more government and less governance”.
Every body is forced to go digital, get their Aadhar Card, link it to just about everything – PAN, Bank Accounts, Mobile Numbers, Credit Cards etc. The GST is supposed to bring in a unified Tax system and also make life easier for the Corporates, trader, the shop keeper and the citizens of this country. The Government is on a roll and is mopping up taxes like hell. Widen tax net, better enforcement & compliance through technology. The citizens have patiently supported the Government in every move. Narendra Modi and especially Jaitely must realise that this patience will wear down sooner or later.  For the common man, nothing has changed. In fact its got worse. More procedures, more compliances, no more privacy and more importantly higher taxes, higher cost of living (despite the inflation figures showing lower figures) and the ease of doing business or quality of living is getting worse.
Despite the huge collection of taxes, especially the killing they are making on Petrol/Diesel, have the passed on any benefit to the common man? Income Tax rates have been marginally reduced (cosmetic change) and the GST rates have not been reduced. It was a wonderful opportunity for the Government to pay back to its citizens by lowering taxes through GST. Instead we have 5 slabs of GST and the highest in the world. Every other country is having single digit GST rates and India is one of the highest with a maximum GST of 28%.
Why on earth have they kept Diesel / Petrol out of the purview of the GST. Because the maximum tax on GST is 28%
Its still not clear if all other taxes / cess will be withdrawn like Octroi, Entry Tax etc.
Don’t understand why the Government should decide what we should consume and accordingly tax these items. Rates of GST varies on where you eat – roadside, non AC restaurants, AC restaurants etc. Hotel rates vary between AC, Non AC and the bill.
So even after 70 years of Independence the Government of India wants the citizens to sweat it out and live in hot humid conditions and deny them the comfort of Airconditioners. It does not want citizens to fly because it is a luxury. Don’t buy cars because it is luxury.
Is this “Ache Din” Mr Narendra Modi.
What a waste of time & energy. The Government / Parliament wastes its time in deciding what should be the tax slab for sanitary napkins, bangles, chappals, razor blades, wheel chairs etc.
GST is supposed to be a unified Single Tax system. Why not have just adopted it in its original form and intent. The Government feared that it would lose its revenue / tax collection. They won’t have money to splurge on politician’s salaries, Z Security for these politicians, waive loans to farmers win votes and to cross subsidize & appease the lower strata of the society. Therefore continue to squeeze the Rich and the middle class.
On the other hand by adopting a unified single Tax rate system,  it would have brought most of the prices down, increased the purchasing capacity of the common man, induced higher spends & consumption and thereby boosted the Economy.

What a golden opportunity wasted.

The second chink in Modi’s armour is the religious fundamentalism being witnessed in the country. If there was one fear of electing Modi, it was about polarisation and it is fast appearing to be true.
Where is the need for Gau Rakshaks, Cow vigilantism, Beef Ban etc. Let not the Government decide what people should eat. If there is a law, implement it by the rule book and silently without making a hula bola about it and antagonizing the aggrieved. If this right wing, religious fanaticism isn’t curtailed and nipped in the bud, it will be the single biggest failure of Modi and the reason for his downfall.

The third factor that is likely to bring his downfall is Jobless Growth. The country is witnessing a Jobless Growth. There seems to be no urgency in dealing with this situation.
It is estimated that India’s labour market has over 470 million people. However India faces the challenge of creating jobs for a predominantly young population. According to credit rating firm Crisil, around 18 million people enter the workforce every year. The number of jobs created is far lower; between 2011-12 and 2015-16, India created 3.65 million jobs a year, according to industry lobby group Confederation of Indian Industry (CII).
While service sector-led growth contributed greatly to soaring GDP levels, it still employs less than 30% of the total Indian population. India is still seen largely as an Agrarian Economy – the source of most employment for Indian people still lies in the agriculture sector, which employs almost 45% of the Indian population (with a 15% contribution to GDP).
Labour-intensive manufacturing base has not quite been the engine of growth for India, as it has been in China.
IT and the BPO sectors alone employ about 4 million people today and the industry’s own estimate is upto 60% of this workforce will not be of any use with their present skill levels.
Existing government programs (including new programs like Skill India, Start-Up India, Make in India) may have marginally added few jobs to the overall demand-supply gap in selected organised sectors of employment, but none of them structurally address problems of prolonging joblessness within rural and urban areas
The situation is quite grim and there is a sense of denial  among Politicians, Industry Leaders, Trade Bodies and the HR Community. Nobody is willing to talk it out openly and are either discussing in hush-hush tones or brushing it under the carpet.
There appears a persistent lack of willingness of the Indian state to demonstrate timely introduction of labor reforms to increase wage incentives;  create a conducive investment climate, encourage Manufacturing, create incentives for employers to hire more people across sectors; and with review existing impact of acts such as the Industrial Disputes Act (which, as per a World Bank study lowered employment in organised manufacturing by 25%), add to the joblessness misery.

Time to pause & wake up

If Narendra Modi feels that there is a TINA factor and he is unassailable he is wrong.
Being an astute politician, he must realise that public sentiments are only as good as last week. One leaked email and the voters swayed 6 basis points and elected Trump in a span of 2 weeks in the USA.
It’s a matter of time that the middle class will start baying for his blood and ask for return on investment. If GST doesn’t bring down prices, improve ease of doing business and if the Income Tax rates are not brought down, the middle class will start looking for an alternate leader. Just like Modi rose from the ashes, there might be another leader who will rise from the ashes. What a great opportunity for a politician.
He must immediately put an end to right wing fundamentalism and ensure that peace and harmony prevails in the country, without fear of what to eat, what to dress and what to speak.
He must take up on a war footing the issue of JobLess Growth and work with all stake holders to ensure that there is a favourable climate for creating more jobs.

He must ensure that he walks the talk on “less government & more governance”  and live up to his promise of  “Ache Din”. People are eagerly awaiting for it.
History will not forgive Modi for wasting such an opportunity to change the destiny of this country if he doesn’t pay heed to these 3 important chinks in his armour.
Lets hope that he is shrewd, astute and is willing to learn from history.